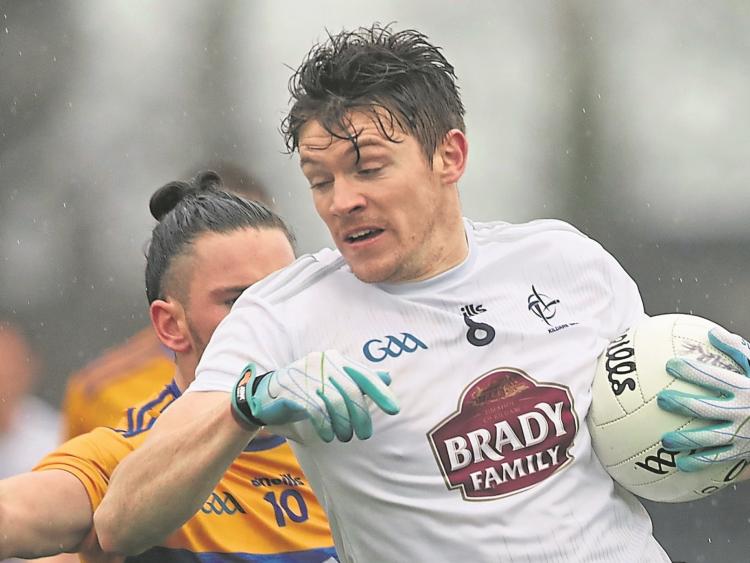 Kildare's Kevin Feely, native of Athy, is known for his outstanding fielding and catching abilities at centre field, or indeed full forward; add to this his soccer background at Bohemians and Charlton Athletic, his sports career has culminated in an All-Star nomination in 2017.
However amidst the current pandemic, Feely and his teammates have had to adjust their training and strategy to add to their frustration.
Kildare manager, Jack O’Connor along with his backroom team, have implemented training programmes to keep the team on their toes while the uncertainty of championship football looms ahead.
“We miss the game a lot, I miss the competitive side of things, training and matches. We’ve been given programmes on our strength work to do at home” he told the Leinster Leader last week.
“ Our strength and conditioning coach Ross Dunphy is trying to replicate the training we’d be hitting on a weekly basis. I’d be self motivated enough and I don’t find it too difficult training by myself during these times. The self discipline is ingrained in you at this stage when you’ve been playing at that level for a certain period of time.
“We miss the game, the training and of course the camaraderie but it's vitally important we stay fit and sharp” while on a positive note Feely says he is enjoy-
ing the opportunity to focus on different aspects of fitness at this time.
The Athy clubman runs his own business, Kevin Feely Athletic Therapy, based in Tallaght, and like most businesses currently, he has had to adjust and has resorted to carrying out his physiotherapy consultations online.
“The nature of my job means I have the facilities available to me to be doing any kind of work outside of training like stretching, strength work, injury prevention work and rehab. In that way it’s been great, it’s probably benefited my football in the same way the football has benefited the business. They tend to work well together.”
It is a very difficult time for all teams, both county and club at the minute admitted Feely but with Kildare “we try and stay in touch; we have the phone call from Jack or one of the selectors, checking in; the team WhatsApp group is still up and running. We’re doing our best staying in touch and in contact.”
Looking ahead to the remainder of the season, Kevin says “it would be brilliant, if the GAA were able to get some sort of championship season played off. But I understand it’s going to be very difficult, I totally understand if that’s something that is simply unfeasible.
“If inter-county doesn't go ahead, maybe focus on getting the club season up and running later in the year can be looked at” added Feely.

McDonalds in Newbridge this morning: Queues are expected in Naas, Newbridge, Maynooth

McDonalds open in Kildare: But warning that drive-thru facilities may close if traffic jams result

Co Kildare road gets temporary speed limit for the summer