Win vital if they are to progress in League 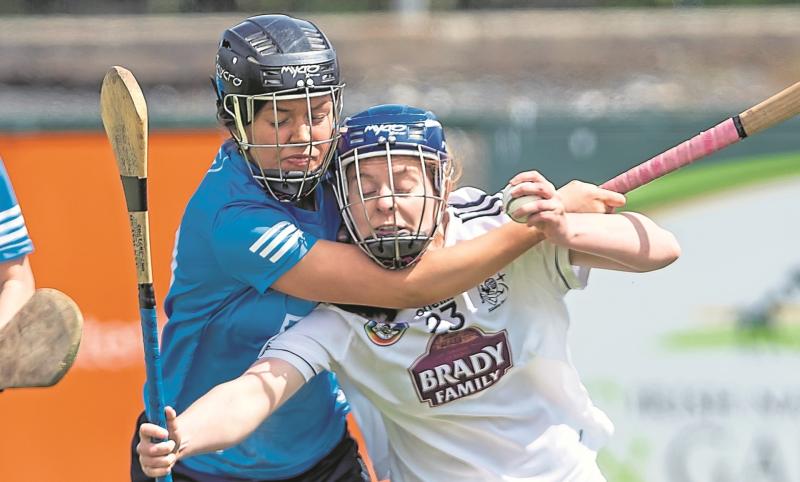 Kildare Kelly Perkins gets caught up in the challenge of Dublin Sinead O'Donoghue during the National Hurling League Division 2 game. Picture: Sean Brilly

Kildare camogie manager, GT Troy, was quick to point out, that just like the previous  week when Kildare lost to Meath in their opening League game, they (Kildare) got off to an explosive start before wavering somewhat.
“Just like last week we made a great start but eased off somewhat before coming back at Dublin again before the break, stuck to our task on the resumption and eventually got over the line.”
The Meath native admitted that he did not realise until half time how strong the breeze was in that opening half but admitted it worked to Kildare's advantage in the second half with some fine long distance frees.
Free taker, Leah Sutton came in for special mention from her manager.

“If she wanted” said GT “Leah could hit those frees into the next parish if she wished but we have to try and get her to just concentrate on the target.”
Kildare take on Westmeath this Saturday, again at Hawkfield (1 pm throw-in) and if The Lilies are to progress they must win and then hope their scoring differences will get them through and no doubt he will again be looking to the likes of Derbhille Byrne and Ciara Egan (and others) to find the Westmeath net come the weekend.
Both Derbhille Byrne and Ciara Egan were brilliant, the manager said, adding  “we were trying to get as much ball as possible into both of the girls; we knew Dublin would employ a sweeper so we wanted to keep the ball out wide; Derbhille showed again this week, as she did last week, that she possession a great turn of pace and that is a real bonus."
The manager said overall he was happy, “we are slowly building a panel; starting to come together, played more as a team today and some of the girls really put their bodies on the line today/.”