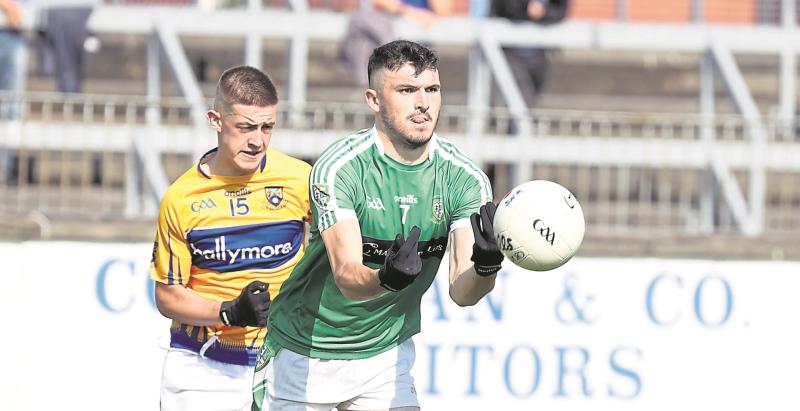 Moorefield Adam Sweeney get his hand pass clear during the game against Raheens in the SFC clash at St Conleth's Park on Saturday, Picture; Sean Brilly

Another big weekend on the local club scene with six SFC, five IFC and six JFC all down for decision.

In the senior and intermediate, Round 2 of the group stages will tell us a lot, both for teams with ambitions of being involved in the business end of affairs, and indeed those who are not good enough to make it through but certainly anxious not to get dragged into a dog-fight at the bottom and possible relegation.

It may not be quiet 'moving weekend' but nevertheless Round 2 of the Joe Mallon (Renault) Motors SFC sees six games down for decision, three on both Saturday and Sunday, with the final two games in Round 2 fixed for Sunday September 12; Saturday 11 being a free day due to the All-Ireland SFC decider.

So we kick off on this Saturday September 4, three SFC game, with the three fixtures meaning different things to different teams.

Maynooth have been one of the real surprise packets so far to date. Initially they defeated Moorefield in the Preliminary Round and to show that was no fluke result they then went on to defeat Johnstownbridge in the first round proper.

Naas, on the other hand sent most predictions tumbling when they got the better of county champions, Athy, in a cracking contest, a game that Naas filled the Athy net on four occasions and came from looking like a team somewhat struggling to dominating the last quarter in a thoroughly deserving victory.

Neil Flynn and Mark Donnellan are the stand-out players with Maynooth but they have other fine players such as Cathal McCabe, Darren Maguire, Eoin Donnellan and county minor Fionn Ó Giolláin who starred in the minor league final against Raheens last week.

Naas though were impressive against Athy; Eamonn Callaghan was superb while Paddy McDermott, Alex Beirne, Brian Stynes and Shane Bergin all looked very comfortable. Eoin Doyle I'm hearing is close to returning, as is Luke Griffin who missed the last game, both players would be a big boost to the boys from the county town. The vote goes to Naas.

Celbridge remain a bit of an unknown quantity, having won the prelim game and defeating Eadestown, albeit after a bit of a scare, are coming in somewhat under the radar.

Carbury took an awful drubbing against Sarsfields, with the O'Flaherty boys they don't looked as threatening as heretofore, although Jack Cully had a fine game that day

Celbridge should have too much for them with Aaron Browne really turning on the style against Eadestown while their county contingent are formidable to say the very least. Celbridge to win.

Both will struggle to get to the quarter-finals and it could be a battle to retain their status for 2022.

Difficult one to call, Confey got a creditable draw against Towers last time out while Castledermot were in it for a long time against Clane for what it's worth. Could go to the wire but Catledermot get the vote.

Clane take on St Laurence's (2pm) and it is a big game for both.

Larries are struggling at the minute, as indeed are Clane but providing they (Clane) have a full pick they should be too strong for The Larries.

Eadestown take on favourites Sarsfields, 4 pm, a daunting task for the boys in blue.

Having said that they are a side that will be more than happy to have won their preliminary game, defeating St Laurence's, while in Round 1 they went under to Celbridge.

Sarsfields, at the minute, are the team to beat, they have some excellent players, their panel looks to be stronger than anyone else, how they react when, if, they are put under pressure we don't know, but they will have too much fire power and all-round strength for Eadestown. Sarsfields to remain on course.

Raheens take on Round Towers, game no three on Sunday, a big game this one for both sides.

Raheens, after a mighty league campaign, seem to have gone back a tad, but having said that they did play decent against Moorefield and were in it up to the last quarter; their over reliance on Paddy Woodgate, good and all as he is, is not helpful, they need to get a better spread of scorers.

Round Towers drew with Clogherinkoe last time out, 0-9 apiece game.

Towers set up very strong at the back these days, something that could be problematic for Raheens. Glenn Ryan's boys were missing Mark Waters the last day, if he returns that would be a big boost for The Towers.

Raheens though are still playing with a belief and if they can get their heads in front that belief could help them over the line.

A tight game expected with the boys in blue and gold getting a (very) tentative nod.

Five games on Saturday and Sunday in The Auld Shebeen Athy IFC and as usual in this grade, it can be very difficult to predict.

The Group A game sees Ellistown and Leixlip clash, Ellistown caused a bit of an upset getting the better of Caragh while Leixlip lost to Ballymore by a point. Expect Leixlip to bounce back in this one.

The other two games can see Ballyteague continue on their winning ways after a big win over Straffan last time and should now have too much for Suncroft while St Kevin's can make it two wins on the trot against Straffan.

On Sunday Ballymore Eustace, who defeated Leixlip by a point in round 1, can get another win over Caragh; Two Mile House after a non-event against Milltown, can add to that against Allenwood.

The junior action gets under way on Friday, continues on Saturday and Sunday, six games in total.

Wins expected for Grangenolvan, Castlemitchell and Kilcullen. Rathcoffey v Ballykelly could be tight with Rathcoffey getting the nod; the same applies to Cappagh and Kill with Kill getting the vote while Robertstown take on Athgarvan, both unbeaten but Robertstown might just prevail.