Lumsden cup kicks off as Newbridge get past Castle Villa 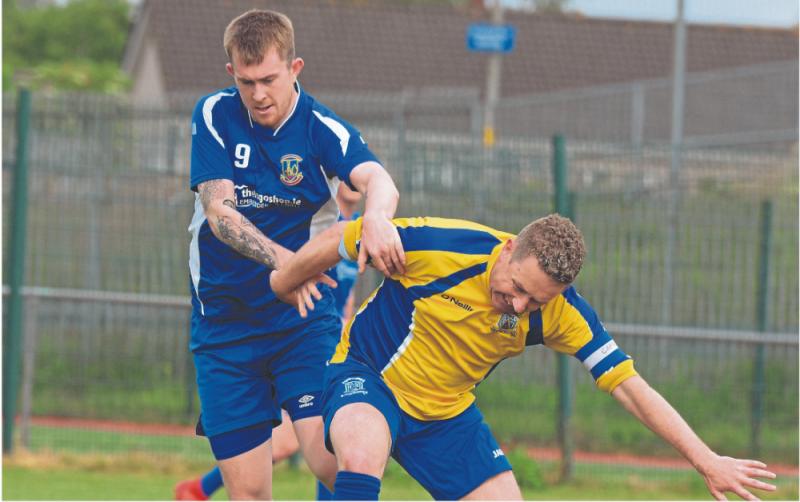 The class and experience of a very talented Newbridge Town team was too much for a club with so many fond memories of the Lumsden Cup, as they overcame Castle Villa in Newbridge last Saturday evening. But only just.

It was an unusual match up, in the sense that Town's over 35 team represented the club in a game against what is a very young Castle Villa side.

Newbridge started strongly and were on top early on with Villa keeper David Doyle making two really good saves early on to deny the home team. when Wayne Callaghan was put through on goal only for his shot to go wide of the Castle Villa goal.

Newbridge Town took control of the game, when the Town keeper, Mark Adverdijk was called into action, after making a save from a shot from Eoin Tynan, Mark played a quick ball out to his full back, David O’Connor who played the ball down the line to

Richie Kelly, who then dinked the ball over the Castle Villa defence and running through from midfield was David O’Riordan who held of the challenge from Brian Hickey to put the ball beyond diving Castle Villa keeper, David Doyle, into the far corner to put Newbridge 1-0 up.

Villa's Sean Hickey had a well drilled strike well saved by the home side's keeper as they began to get more of a foothold in the game. The front two of Aaron Delaney and Aaron Brennan were working hard, without really getting much change out if an excellent Newbridge rear guard which was being marshalled by the evergreen Ray Coleman, who led by example for the entire game in a superb man of the match performance.

Villa made two changes at half time in an attempt to get back on level terms, and with Jordan Harmon beginning to impose himself in the centre of midfield, chances began to come the Castledermot men's way.

Aaron Delaney was desperately unlucky to see a bullet header cannon back off the crossbar from that corner and soon afterwards, Eoin Tynan saw a shot well smothered by the ‘Town keeper after some great work by Ethan McGlinchey.

There was a good 20 minute spell where Villa pushed hard but were continually rebuffed by Coleman and Co and as is the irony of football sometimes, it was the home side that doubled the lead in the seventy second minute In the second half,

Castle Villa came at Newbridge Town in an attempt to get level, and indeed they very nearly did when there forward Aaron Delaney had a shot that struck the crossbar. From another Castle Villa attack which was dealt with by Newbridge, the ball was played out to Town Substitute David Stanford, who replaced Richie Kelly, who then played the ball into Wayne Callaghan who held off the Castle Villa defender and as he ran into the box shot past the out coming Castle Villa keeper, David Doyle to put Newbridge Town 2-0.

That setback didn't deter Villa, who piled forward in search of a way back into the game and that finally came with 15 minutes remaining. Jason Morgan was introduced for Sean Hickey and his drive and physicality almost immediately won his side a corner. He was being treated for a cut lip as Jordan Harmon placed another brilliant set piece into the danger area and Eoin Tynan rose highest to head home and get just rewards for an immense second half performance.

Villa introduced more youth and pace in the form of James Clifford in an attempt to get back on level terms but the longer game time didn't affect the Newbridge lads the way some may have thought it might. And they may well have extended their lead as Villa keeper Doyle had to be at his best on a number of occasions as his side flooded forward. The experience and game management shown by Newbridge was something that their younger opponents will learn from, no doubt.

Overall, it was a deserved win for the home team, and they progress to the next round where they'll meet Naas United in Naas in a couple of weeks time.

Best for the winners were in defence Ray Coleman, midfield David O’Riordan, Conor McBride and upfront was Tommy Feane and the Newbridge Town Man of the Match was Wayne Callaghan.

Best for Villa were keeper Doyle, Jamie Doyle and Jordan Harmon as well as Ethan McGlinchey and Eoin Tynan who had excellent second half displays.