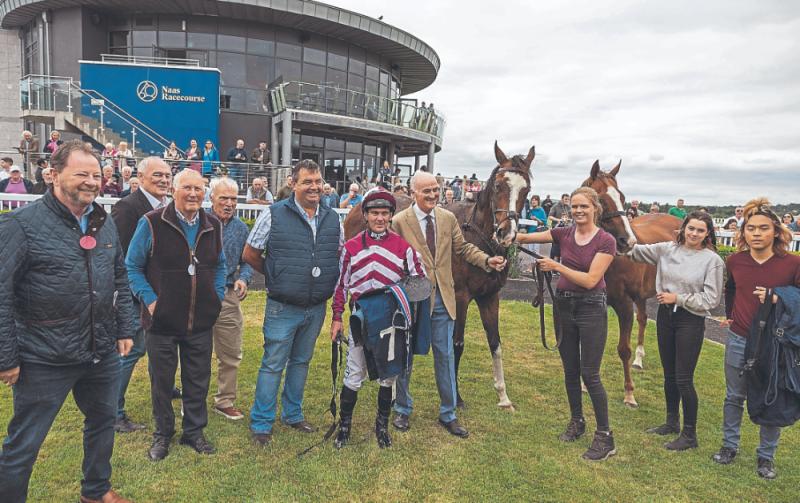 Gary Carroll rode three of the seven winners at Naas on Wednesday evening.
Combining with Curragh trainer Richard Brabazon, he landed the near six-furlong handicap on 7/2 joint-favourite Gordon Bennett.

Owned by the Out All Night Syndicate, the four-year-old led inside the final furlong to beat the Johnny Levins-trained Shawaamekh, the other market leader, by a length and a quarter.

Carroll’s winning run continued in the Listed Yeomanstown Stud Irish EBF Stakes which he won the outsider of Ger Lyons’ two runners, Pirate Jenny. The 13/2 chance wasn’t missed in the betting and came home three-parts of a length to the good over the Jessica Harrington trained Sablonne with the Lyons-trained 5/4 favourite Sacred Bridge, the mount of Colin Keane, a head away in third place.

Carroll then beat Lyons to take the concluding seven-furlong handicap on the Michael Mulvany-trained Big Baby Bull. The 12/1 chance came late to beat Lyon’s front-runner and 100/30 favourite Rick Dalton by half a length.

Ross O'Sullivan recorded his first double when landing the opening two races at Cork on Friday evening.
His winners scored in contrasting styles with the Billy Lee-ridden 100/30 chance Chrismoltisanti taking the six-furlong maiden with a last-gasp success over the Jessica Harrington-trained front runner Lopes Gold in the colours of owner Stuart Robinson.

Conor Hoban had a far easier time on the Yvonne Lavin-owned Samrogue which took the handicap over the same distance by an easy three lengths from the Denis Hogan-trained Florence Thompson at odds of 8/1.

Mullacash-based Tom Dowling landed the concluding 13-furlong handicap at Down Royal on Friday evening with 25/1 chance Starlight Rose. Owned by the Euphoria Syndicate, the three-year-old came from the back of the field under Wesley Joyce to score by a neck from the Andy Oliver-trained 5/2 favourite Regally Blonde. It was the trainer’s fourth winner.

At Gowran Park the following afternoon, Johnny Murtagh’s Chicago Lightening lost out by a shorthead in the second division of the apprentice handicap but the Curragh trainer was on the mark with the Shane Kelly-ridden Shanghai Dragon in the eight-furlong fillies and mares’ handicap.

The Shanghai Racing Partnership-owned three-year-old led after a furlong and held off the fast-finishing Any Dream Will Do by a neck at odds of 12/1. Brewel Hill was an 11/1 winner for Curragh-based Gearoid Brouder and Shane Foley in the opening division of the nine-furlong handicap.

Owned by the An Stil Beatha Syndicate, the six-year-old held on to beat the Lee Smyth-trained Lily Of The Glen by a head having led passing the two-furlong pole.

Willie McCreery was among the Leopardstown winners on Thursday where Helpmeout, owned and bred by Redpender Stud, came from well off the pace to take the eight-furlong handicap for three-year-olds.
Billy Lee’s only ride at the meeting, the 7/1 chance came from the back of the field to lead well inside the final furlong to beat Dermot Weld’s Westernesse by a neck.

He won the maiden hurdle for four and five-year olds with the Pat McCarthy-owned Telecon which was left clear by the fall of the Mark McNiff-trained Turkestan at the second last flight to score by an easy 15 lengths under Ricky Doyle at odds of 11/2.

Rebel Rose, the first of three winners on the evening for Jack Kennedy completed the trainer’s brace in the maiden hurdle for older horses with a two and a half-length success over the Sam Curling-trained 5/4 favourite Troubled Times. The 2/1 winner runs in the colours of Swords Bloodstock.

Coming late and fast down the centre of the course, Jamie Powell produced Takeachancejimmy to win the second of the handicaps over the extended nine furlongs at Ballinrobe on Monday evening. The Nigel Slevin-trained eight year-old, successful in the corresponding race a year ago, led well inside the final furlong under the Kildare Town apprentice to beat the Jessica Harrington-trained Laelaps by a length and a quarter, an identical winning margin to 12 months ago, at odds of 17/2.

Having finished runner-up on two earlier rides, Gary Carroll rode the Joe Murphy-trained Sionnach Eile to victory in the 13-furlong handicap by five and a half lengths from the Michael Grassick-trained Stellium.

Leading through the early stages the well-supported 7/2 shot remained up with the pace and went clear early inside the final furlong to score in great style,.