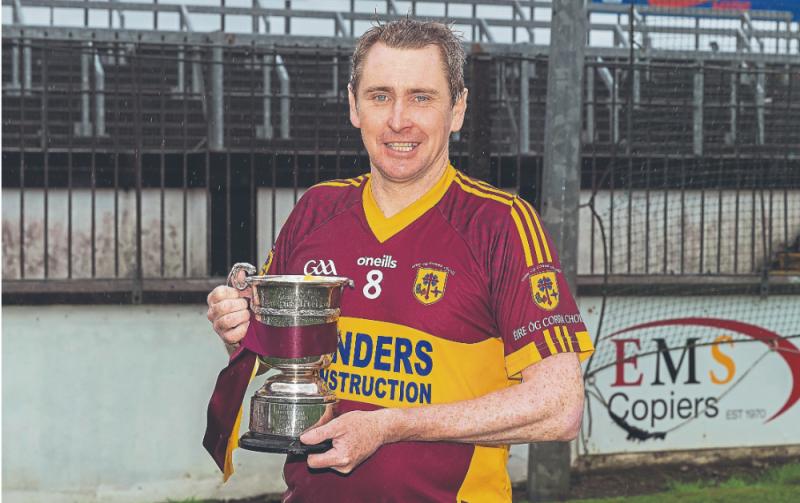 Éire Óg Corra Choill beat Wolfe Tones to claim this year’s Junior Hurling Championship. The win came as a result of three crucial goals in the final 12 minutes for the eventual winners, two of which coming for full-forward Brian Fitzpatrick. Fitzpatrick got very little ball all day, through no fault of his own, but when he did, he made it count.

Finals are always tense regardless of competition, conditions or anything in between and this tie was no different as Jason Corcoran got this game under way in a rain drenched Newbridge. The opening score came from a man who would go on to make his mark on this game in the form of Wolfe Tones’ Aaron Carney.

Carney's opening score looked like it may have dipped under the bar but Éire Óg Jeffrey Dunney was wise to it and tipped Carney’s effort over. It wasn’t the only time Carney tried to catch out Dunney, when a free in-front of the posts on the 20 minute mark, which would usually just be tapped over, came about. Carney had different ideas and despite his side only leading by a point, he cheekily went for goal but was brilliantly denied by Dunney.

The Wolfe Tones sideline might have been miffed at their star-scorer Carney, but the corner-forward slotted the resulting 65’ between the sticks with a minimum of fuss.

Each goal was rarely threatened past the second minute but after 90 seconds we had a goal-mouth scramble for the ages. As Éire Óg’s Liam Power was heading through on goal, he smashed an effort that looked certain to hit the net but was expertly smothered by Tones keeper Niall Gorey. Power would get another bite of the cherry but would again be denied by Gorey. There were several more attempts as the Tones had what seemed like the entire team on the line to keep a goal out and to their credit, they somehow did just that.

After the early tense exchanges it would be Wolfe Tones and that man Aaron Carney who would pull clear towards the end of the first half. Four Carney scores without opposition reply meant his side led by 0-8 to 0-5 at the break.

However the Wolfe Tones were reduced to just 1-1 in the second half, with the goal being little more than a consolation late on. But Éire Óg still had to close that gap and get the job done.

The turning point was the first of the aforementioned Brian Fitzpatrick goals as substitute Mikey McGovern sent the ball into the full-forward. Fitzpatrick turned and smashed home with relative ease, he wheeled away with his trademark celebration. Much akin to Alan Shearers with just the one finger and arm raised in the air.

The next green flag came from Éire Óg veteran and captain JP Crotty who converted a penalty to pull his side well into the clear. Fitzpatrick would close the show with another goal, a carbon copy of the first, also identical was of course the signature celebration as the win and the Championship was in the bag.