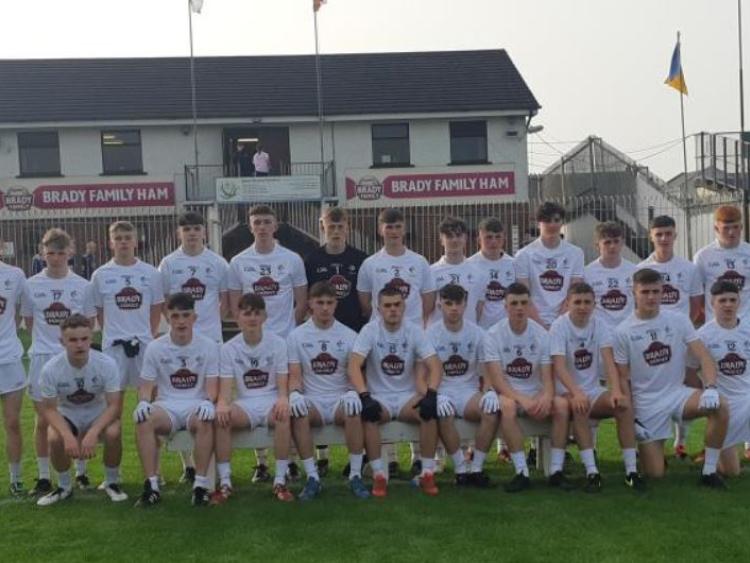 The Kildare Minor Footballers booked a place in their sixth Leinster Final in seven years after they dug out a workmanlike victory over Laois in O’Moore Park on Friday Evening.

Kildare were the dominant side for the vast majority of the contest and despite kicking seventeen wides throughout they claimed a three point win. Eoin Bagnall top scored for the winners with eight points but seven of those came from frees as the Allenwood man put in another free taking exhibition.

Laois were second best but a first half goal from Oisin Hooney kept them in touch while Kildare goalkeeper Cian Burke brilliantly denied Brian Whelan with a close in effort that would have gave them the lead at that stage.

Laois still went into half-time with the advantage but they only scored three second half points as Kildare took control and with only four Lillywhite players on the board it was the defence that really stood out.

Kildare dominated the opening quarter as they raced four points clear with a trio of frees from Eoin Bagnall coming on the back of a score from play by Aaron Browne.

The lead could and should have been greater but they were incredibly wasteful in front of goal with ten first half wides and Laois took advantage when Oisin Hooney got free in the 17th minute and kicked in a goal.

Bagnall restored parity with his only point from play but if the first quarter was Kildare’s then the second definitely belonged to the O’Moore County.

A point from distance by Conor Goode reduced the lead to one before Oisin Hooney set up Brian Whelan but his well driven effort was well saved by Cian Burke.

The miss didn’t overly affect Laois and somehow they went into half-time in front with points from Goode and Colin Dunne giving them a 1-3 to 0-5 lead.

In similar fashion to the first Kildare began the second period in the ascendancy with two Bagnall frees and a well taken score from Carbury’s Oisin Millmoe putting them back in front.

Laois’s only point at this juncture came courtesy of a free from Brian Whelan but the game never really got a chance to flow as a result of pretty fussy refereeing by David Fedigan.

Milmoe was a big threat up front for Colin Wards’s Kildare side and his elusiveness was in full view in the 41st minute when he bore down on goal before being cynically tripped by Ciaran Burke who duly got a black card.

Bagnall then knocked over his last two frees and Kildare didn’t really look back from there.

A Brian Whelan free originally kept Laois within range but the game was put to bed with late Kildare scores from Aaron Browne and Shane Flynn.

Ciaran O’Brien got a late black card for an off the ball incident but nothing was going to spoil Kildare’s party and although Laois full back Sean Greene kicked a stoppage time point it arrived too late as Kildare made it through to another Provincial Final.