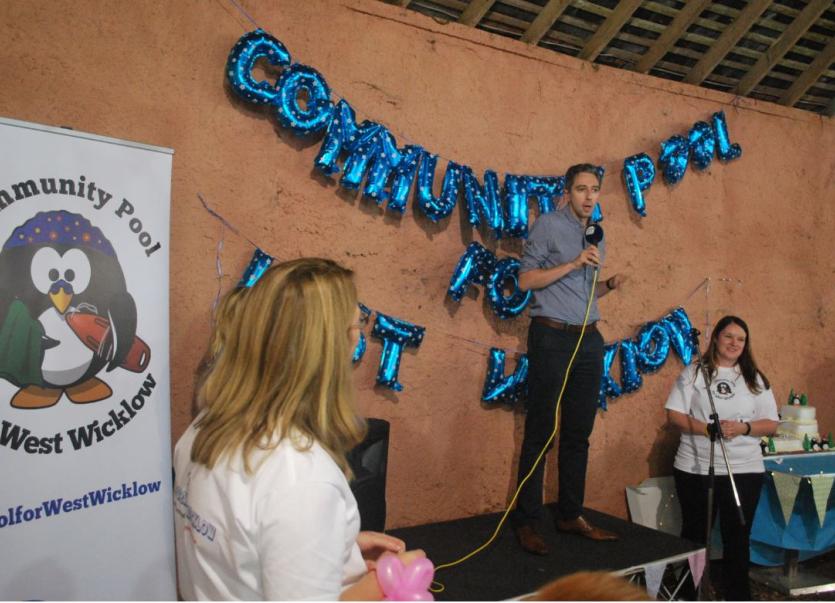 The announcement was made to a crowd of over 300 people at Russborough, where the Community Pool for West Wicklow Campaign hosted its first birthday celebration. Baltinglass MD is the smallest municipal area in Co Wicklow, a mere 15 people less than Arklow MD. The committee formed last year to highlight the lack of a public swimming pool, the only MD in Co Wicklow without a pool and to commence fundraising for same.

Speaking to Kildare Now, Cllr O'Neill made his preference clear for the location of the public pool.

“Given the population of Blessington, I would think it is the most likely site for a public swimming pool. Wicklow County Council own 32 acres of lands at the Avon Rí site. I'd like to see the rezoning of that site, and the more recreational amenities provided there, the better”.

However, Cllr O'Neill noted that Blessington Area Plan has yet to be updated. “We are working from the old plan, WCC need to update the area plan, and a site identified for the public swimming pool as soon as possible. Given the Minister's commitment to deliver the pool in the next two years, all of this needs to be prioritised and quickly.”

“It's 72km from Manor Kilbride to Carnew in Co Wicklow - that's a total of 26,000 residents - with no public swimming pool in this area. If I want to swim, I have to go outside Co Wicklow. Our supporters hail from Blessington, Baltinglass, Hollywood, Dunlavin, Donard, Carnew, etc so we welcome the Minister's commitment to delivering the pool in under two years”.

While addressing Saturday's crowd in Russborough, Deirdre noted that earlier this year, Wicklow County Council (WCC) commissioned a feasibility study into a possible swimming pool for West Wicklow. A draft presentation of this study was delivered to local councillors and attended by the Community Pool for West Wicklow Campaign Committee in April, and came back in favour of a pool for the area.

Deirdre said: “Following on from this, WCC applied for Stream 1 funding from the Large Scale Sports and Infrastructure Fund.  Whilst these are the first positive steps towards the deliverance of a swimming pool for the area, we, the committee, are committed to raising one million euro over the next two years, as the community's contribution for the project.”

Deirdre called on all local sports groups and teams, community groups, District and Town Forums, local schools and businesses to work together with the campaign to raise the ambitious target.

Saturday's event entailed advice by Water Safety Ireland to party goers, young and old, on how best to stay safe while in the water, plus they helped Minister Harris to brush up on his CPR skills with their mascot Uisce Bear; Wicklow Local Sports Partnership hosted giant games of Connect 4, Jenga,  snakes and laddersetc. Ruth Shine School of Dance entertained whilst Katie Charles had everyone up and moving with her 'dancercise' routines plus East Coast FM and Sinead Carroll hosted face painting and balloon animals on the day.