Athy hold off the Bridge to seal last 8 spot 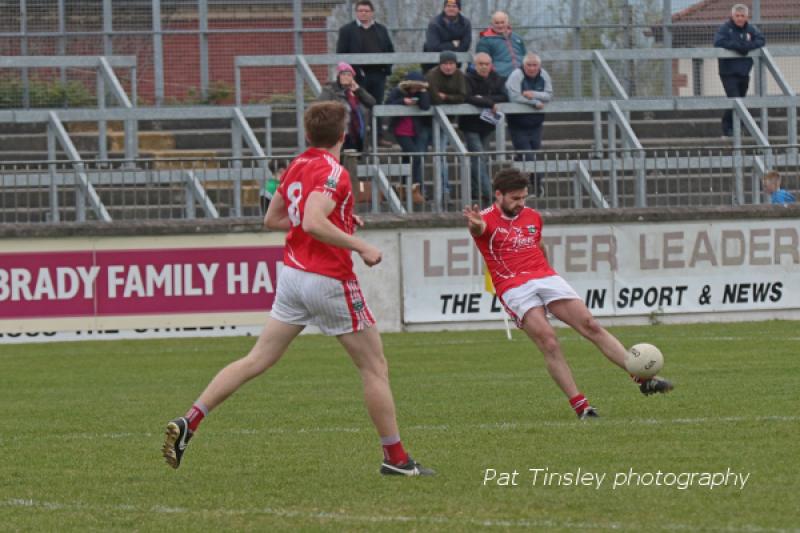 Athy booked a place in the Quarter-Finals of the Senior Football Championship with a four point victory over Johnstownbridge in St.Conleths Park on Saturday afternoon.

The margin of victory probably flattered Johnstownbridge as Athy were the better side throughout and they were able to go up a level when needed.

Athy had a much bigger scoring threat than their opponents and after they curbed the threat of Cathal McNally and Daniel Flynn they were able to kick on.

The game was tight early on but after Athy kicked three on the bounce at the end of the first half they were able to keep their opponents at arms length.

Both teams played without key men as Johnstownbridge’s Paul Cribbin stood on the sideline with his shoulder in a sling while Kevin Feely despite being named in the subs got no game time for Athy.

Athy looked a goal threat immediately from the off as Danny O’Keefe palmed a shot just over the crossbar after a long inside ball from Cian Reynolds hung up in the square.

Johnstownbridge with a Sam Doran score from play after he was assisted by Kelvin McNally hit back but back to back points from Liam McGovern and Cian Reynolds had Athy two points to the good.

The two number 15’s in James Eaton and Cathal McNally then exchanged points but the sides were soon level at the halfway mark of the half when McNally and Doran again found the target.

Daniel Flynn gave his side the lead for the one and only time a couple of minutes later with a fisted effort when a goal may have been on.

Johnstownbridge only scored once more in the second quarter however as Athy began to work them out with points from McGovern and Niall Kelly giving them the advantage before Kelvin McNally from a free kicked the equaliser.

Athy finished the half on top though with a well taken free from James Eaton coming before efforts from play by Sean Ronan and the returning Paschal Connell that gave Athy a 0-9 to 0-6 buffer at the break.

Niall Kelly with his second point of the game pushed the lead out to four at the start of the second period before the mercurial Daniel Flynn responded with a point of his own with an exquisite score off his weaker left foot.

Athy then had a chance to race clear on the scoreboard when O’Keefe brilliantly caught a ball from Cian Reynolds but he blazed his shot wide when getting a chance inside.

David Hyland made up for that miss with a point afterwards and when Daniel Flynn had a goal disallowed Athy looked to be in good shape.

Luke Flynn got the deficit back to three points with a long range free but it was only a brief stutter as four points in a row all but sealed the victory for Athy.

Eaton and McGovern kicked frees with Reynolds and Hyland getting the scores from play as a seven point gap was opened up.

Sean Ronan was very good throughout for Athy and he blocked a goalbound effort from Cathal McNally and that was practically last chance saloon for Brian Flanagan’s men.

Doran as well as Luke and Daniel Flynn kicked late points but they only arrived at the back end of the game as Athy took the victory with a bit to spare.