Kildare Rose 2019 Emer: "I loved every minute of my Rose experience".

From start to finish, St Laurence's star stated the entire experience was wonderful 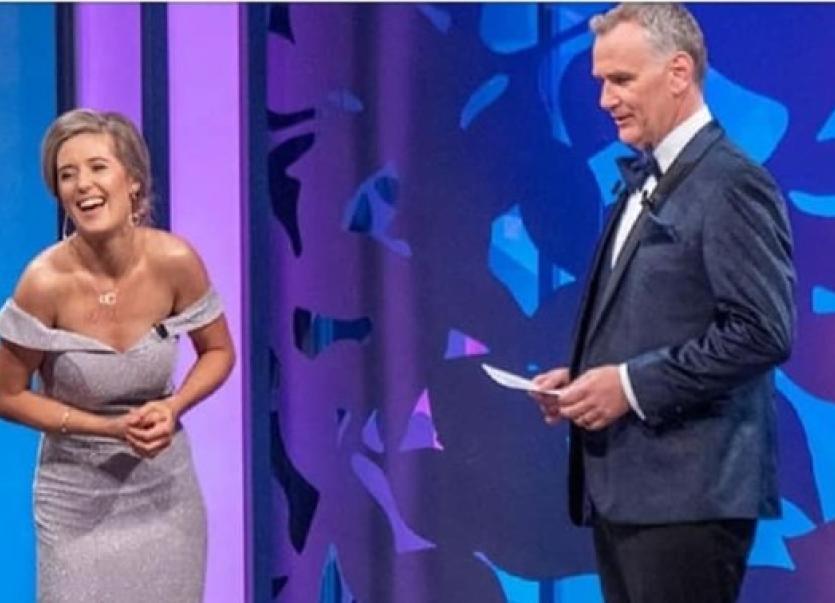 Emer Fogarty, Kildare Rose 2019 did us proud at the Rose of Tralee this year

Looking stunning, absolutely gorgeous in a silver shimmer full length evening dress, this year's Kildare Rose Emer Fogarty won the hearts of the country when she engaged with presenter Daithí O'Sé on stage. The last Rose to be interviewed on night one of RTÉ's live broadcast from the Dome of Tralee, St Laurence's and Kildare's All Ireland forward didn't show even a hint of nerves on the night.

“I genuinely didn't feel nervous on the night. I was the last girl up to be interviewed, so I felt totally at ease, and very relaxed. I'd built up a good rapport with Daithí during the week, so the live interview didn't seem so daunting.”

Emer's petite frame was perfect for the figure hugging sparkling dress she selected from Simply Divine (near the Red House). Whilst the dress looked like it might have been a pale mauve or lilac, it wss in fact silver and changed colour under the lighting of the dome. With a diamond beaded waistband, a sweetheart neckline and an extended train at the back, Emer looked the picture of vintage elegance, petite, poised and so polished!

An organisational psychologist, the 24 year old has a degree in Psychology from NUI Galway and works with Version 1, an IT consultancy firm based in Dublin. Supported by a large family, Emer's family included her mother Ann and her siblings, among them Emer's uncle and godfather, Nick who traveled home from Perth, Australia; sisters of her late father, Mick; and of course, her boyfriend Ian and his family in support, along with further friends. No shortage of support, that's for sure!

“There were also some of the girls from the Kildare Rose selection, and they were so supportive” she said.

Emer struck a chord with many when she spoke onstage of her family's grief and loss at the death of her late father, Mick, who still only a relatively young man at the time of his death. But, she claimed, it was during this traumatic time that she realised just how much they were part of a wider 'family', that is the family of the wider GAA community. The support and goodwill extended to her mother and surviving children was heart warming. 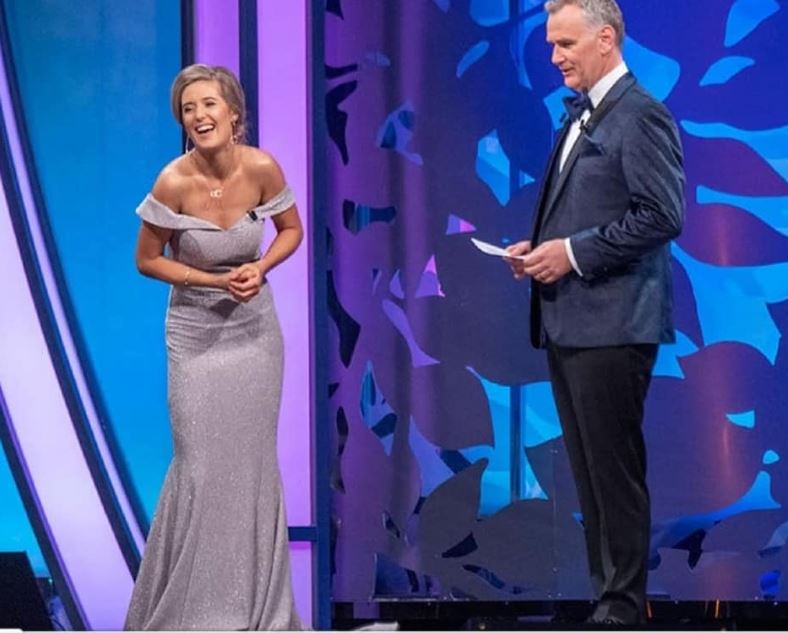 Emer displayed no nerves on stage with presenter, Daithí O'Sé during the live interviews

When Emer sang “The Parting Glass” (below) dedicated to her late father Mick, you could hear a pin drop in the auditorium.

“The whole experience of competing in the Rose of Tralee just got better day after day”, said Emer.

“Every day exceeded my expectations. There are so many highlights from the event, it's hard to remember them all but one standout memory for me is meeting a little boy, only five years old, with terminal illness. He wants to be a garda when he grows up and I can still see him, dressed in a garda uniform when he met the Roses, and chuffed with himself! He gave me the biggest hug ever as I was leaving. I have so much to be grateful for, whilst this little man has been through so much already.”

The other 'big' moment she recalls from the week was the parade of roses through Tralee town. “Each rose is dedicated to a specific public house in Tralee and mine was Paddy Mac's. As we approached, I could see my mother Ann outside Paddy's and her eyes welling up with pride as she spotted me. My boyfriend Ian Mulligan (from Newbridge) was also there and it was such an emotional moment for me”. 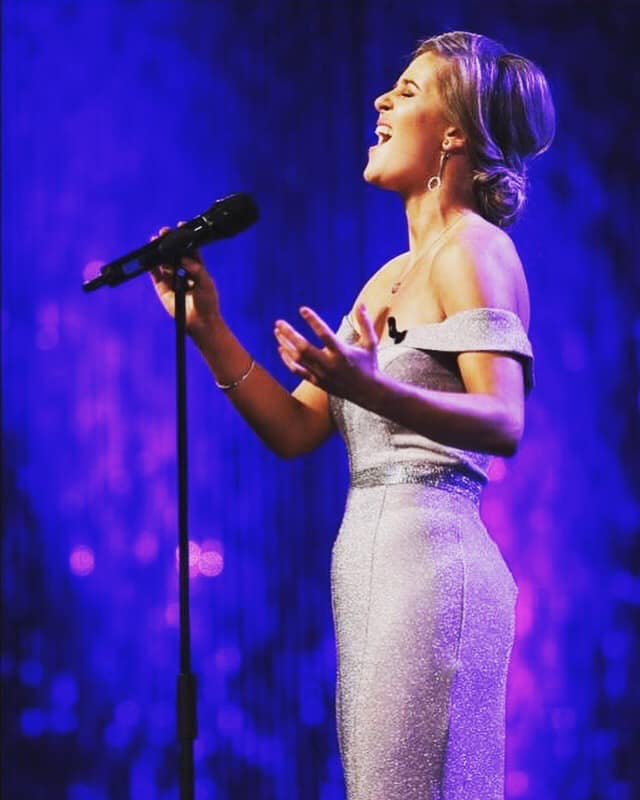 Would she recommend the experience?

“Absolutely! It was such a positive experience from start to finish... We started from Kildare and I have to say, Áine Mangan from IntoKildare was super. The Rose tour actually started from Co Kildare, and it was so well co-ordinated. I was told by the judges that so many of the girls mentioned the visit to Moone as being the stand out visit of the tour!

“We launched at Castletown House, then onto the Glenroyal Hotel in Maynooth where Ted Robinson, GM, treated us so well. We went to the Curragh Racecourse, stopped off at St Conleth's of 'Newbridge or Nowhere' fame), and of course, visited Kildare Village and Kilkea Castle. It was all so very positive for Co Kildare”. 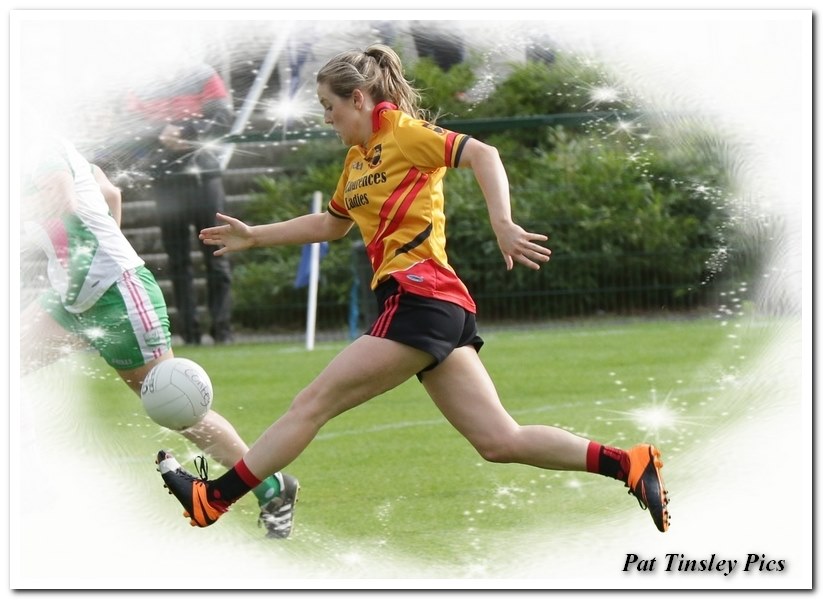 The St Laurence's and Kildare All Ireland winning forward certainly kicked Kildare into touch at this year's Rose of Tralee. Photo Pat Tinsley