Kildare handballer delighted to be included in sport elite 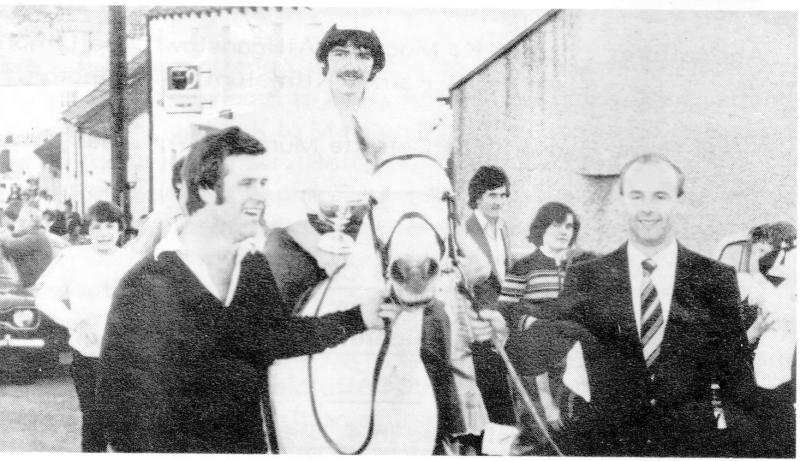 Tom O'Rourke was led through his home village after an historic win in 1979, accompanied by John Browne and Matt Purcell

Earlier this month saw the last Senior All Ireland handball singles played in the glass alley at Croke Park. All future games played in the completed state of the art complex, after the old alley is demolished.

For Ballymore Eustace Handball Club, September 7 was a night to remember, with Gary Bolger claiming the national Golden Masters B (O50s) title when he defeated Tyrone's Finbarr Fullen, 15-21, 21-9, 21-14. But a further cause for the Kildare club to celebrate was the inclusion of Tom O'Rourke among the game's legendary senior singles winners.

Speaking to KildareNow, O'Rourke said: “I was absolutely chuffed to be included with the some of the biggest names in handball sport – the likes of Paddy Reilly and Ollie Harrold, Kilkenny; Tony Ryan, Tipperary and Packie Ryan of Dublin. There was also Tom Sheridan (Meath), Dick Lyng (Wexford) and of course, Eoin Kennedy (Dublin) who defeated Robbie McCarthy (Westmeath) on the night.

“But sadly, there were two former greats I'd loved to have standing with us on Saturday night – the late Ducksie Walsh of Kilkenny and the late Joey Maher of Louth, legends the pair of them.”

After success in 1979, O'Rourke featured on the front of Kildare GAA Yearbook 1980

With an impressive scoresheet at juvenile and underage competition, O'Rourke claimed 15 All Ireland titles during his career, including 7 senior singles titles and two doubles, and two 'Top Ace' titles (1979 and 1984).

The late Ducksie was his nemesis, having beaten O'Rourke in three national finals; a fourth title he contested against Paddy Reilly of Kilkeny, but O'Rourke was forced to withdraw owing to injury.

O'Rourke's first senior single softball title came in 1979 against Packie Ryan, 21-11, 21-11. It was an historic occasion, being the first and only time a Kildare player secured the softball title.

That occasion is still remembered in his home village of Ballymore Eustace when local sporting, community and business interests united to host a welcome home party for the newly crowned champion. He was duly led through the village on a white horse, flanked by John Browne and Matt Purcell, two local renowned handball players. Hardball was the main sport played in Ballymore so a win in softball was an added bonus. 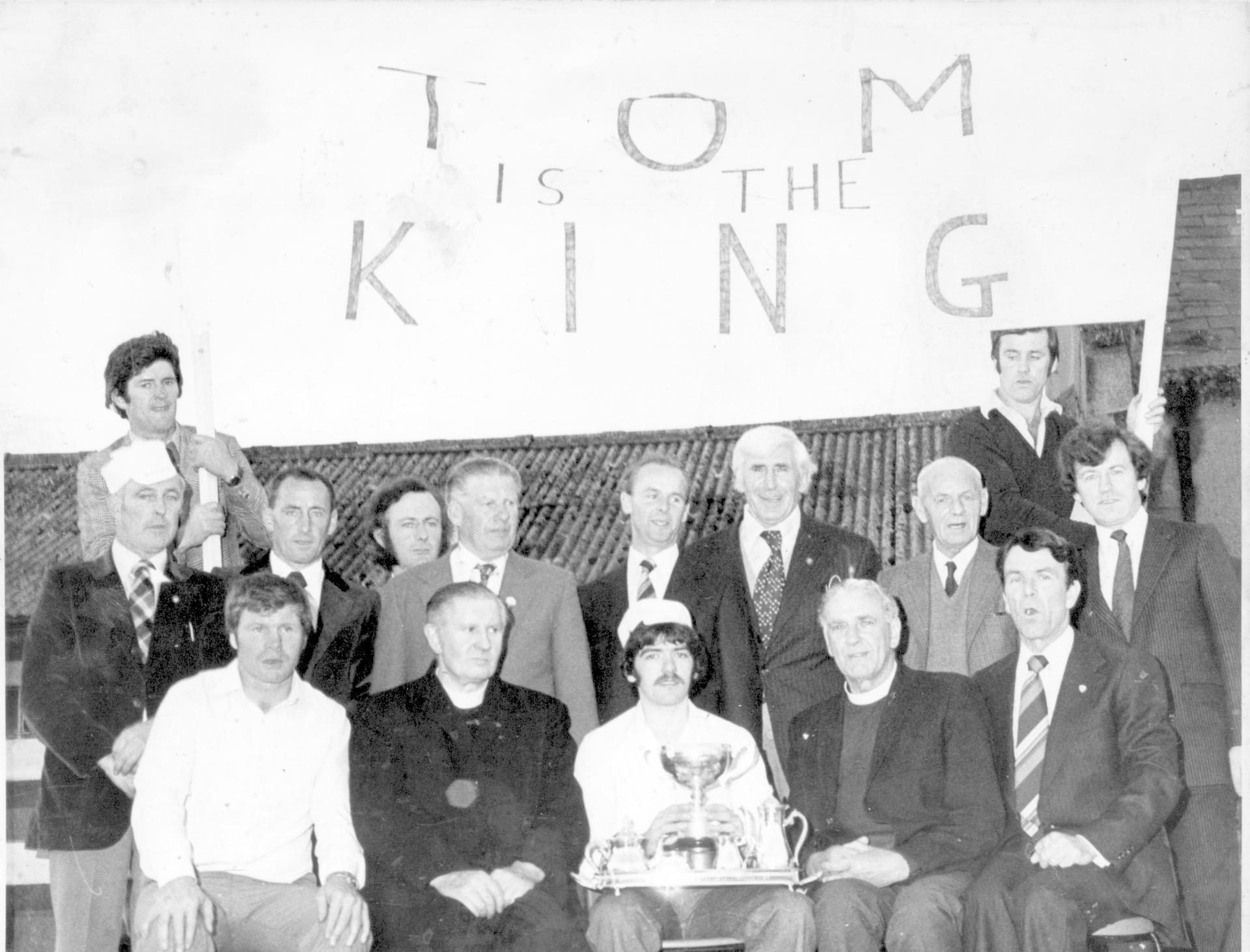 A huge banner reading “Tom is King” (above) was the backdrop for the podium where Tom was proudly lauded and the celebrations ran for weeks.

1984 was the year O'Rourke dominated the senior singles court, when he won a trio of the top titles: All Ireland senior singles softball title; the Centenary Open singles title and the world singles title – all three being played in the soon to be demolished glass alley at Croke Park. Handball was 'glamorised' for a few years as the handball championships were broadcast on RTÉ's 'Top Ace' programme.

O'Rourke twice claimed All Ireland doubles' championship, with fellow club member, Mickey Dowling and Padraig McCormack, also representing Kildare. O'Rourke states with pride that one of his greatest achievements in handball was coaching Ballymore's PJ McGrath to an All Ireland U16 title.

On the coaching side, O'Rourke has enjoyed success with several GAA football teams in his native Ballymore Eustace, having managed an underage team from U14 championship title up to minor success and he was part of Jarlath Gilroy's management team which defeated Nobber to claim the Leinster title in 2010 (amidst the infamous snow debacle).

O'Rourke has served on Kildare County Board for years, at least 8 on the CCC but recently moved over to the Hearing Committee.

“I was delighted and deeply honoured to be among the history of former handball greats hosted at the glass alley at Croke Park” he said “And to see clubman Gary Bolger take a national title for Kildare and the club on the night. Congratulations to Gary, his Da Jim would have been so proud”.

“It was a fitting end to a great season for Ballymore Handball Club, which has been having a great run recently” concluded O'Rourke. 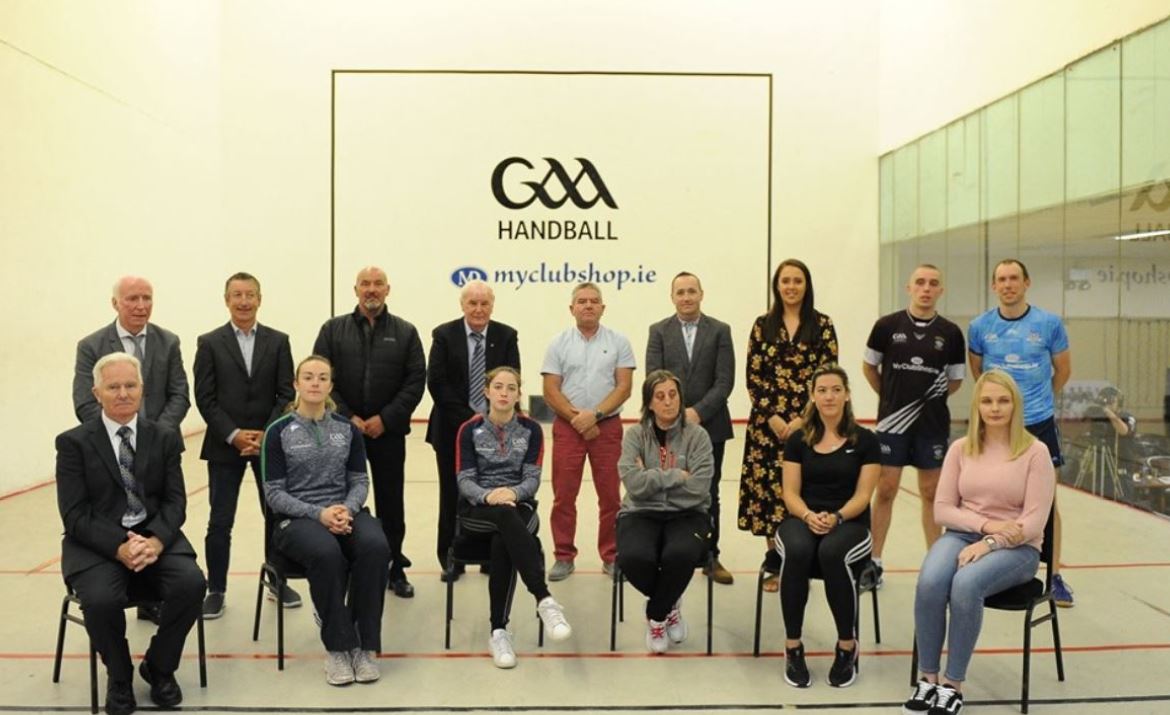