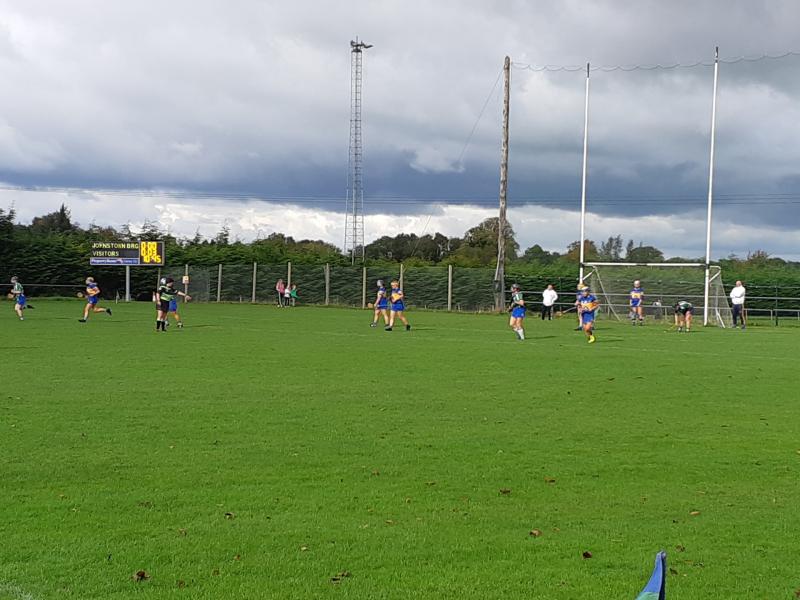 A devastating second half where the hosts outscored Castleknock 0-12 to 0-1 was the cornerstone for the North Kildare’ sides victory.

Castleknock led 1-6 to 0-6 at the break with Rebecca Cassidy getting the goal but they could never build on that with Johnstownbridge’s bigger overall strength telling in the eight point success.

Johnstownbridge reclaimed their County Title with victory over Naas a couple of weeks ago and despite having home advantage they were slow out of the blocks in this Leinster last eight affair with Castleknock going four points clear early on.

Castleknock half back Molly O’Neill knocked over a brace of frees with efforts from play by Ciara Murray and Aisling Andrews giving the Dublin side a big early lead.

Johnstonwbridge eventually got on the board with a Siobhan Hurley free in the 14th minute but O’Neill’s third free left Castleknock 0-5 to 0-1 ahead halfway through the half.

It was at this stage that the Bridge got some momentum going with four points on the bounce as a pair of Hurley frees were followed up by Erin McEvoy and Roisin O’Connell splitting the posts.

Castleknock always looked a threat in attack though and a Aoife Whelan score edged them back in front before the only goal of the game arrived in the 27th minute when a point attempt from Aisling Andrews dropped short and when Tayna Johnson lost control of the sliotar in the Johnstown goal Rebecca Cassidy was there to find the empty net.

McEvoy did get her second and Johnstown’s sixth point just before the break as Castleknock held a 1-6 to 0-6 lead at the interval.

If things were tightly fought in the opening period the opposite was the case on the resumption with Johnstownbridge hitting a remarkable twelve points on the spin.

Two frees and a 65 from the super accurate Hurley levelled the game by the 42nd minute and it was plain sailing from there for Richard Flanagan’s team.

There was a number of big hits throughout the game but Johnstownbridge were fully able to take it as well as give it out and their camogie did the talking with Hurley scoring seven more points before the end including two fine efforts from play.

The midfield pairing of Aisling Holton and Clodagh Flanagan both had fine outings and justifiably got on the scoresheet as Johnstownbridge attacked at will.

Castleknock had limited amounts of the ball in the second half and their only score came courtesy of sub Bronagh Quinn who knocked over a 63rd minute free but the impact was much too late as Johnstownbridge booked their place in the semi-finals.