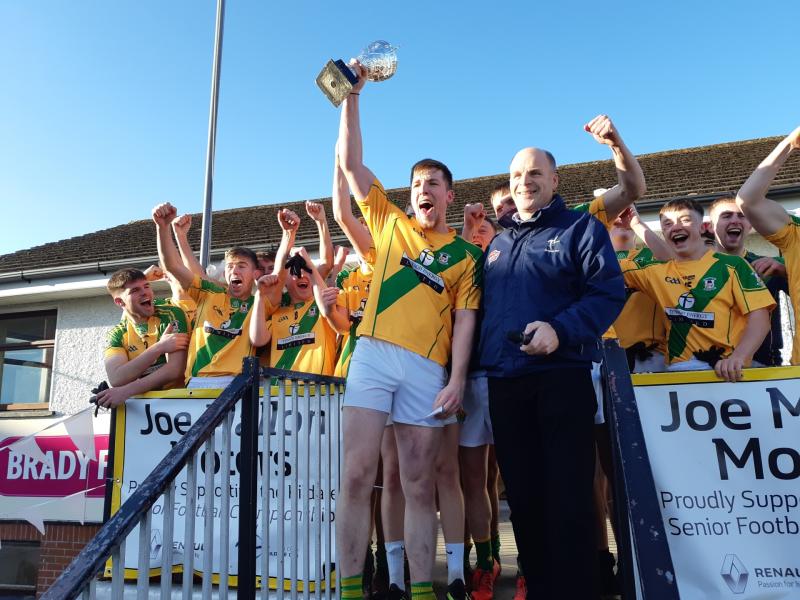 Two Mile House took home the Under 21 C Football Championship Title after easing to a twelve point win over Rathangan on Sunday afternoon.

Two Mile House led by four points at half-time but a second half where Rathangan failed to score and Two Mile House scored 1-5 without reply was the difference.

Adam Byrne got the House’s second half goal and on the back of efforts in the opening period from the impressive Byrne and Adam Conneely the final scoreline doesn’t flatter the victors.

Rathangan were competitive in the opening period with goals from Ben Savage and Kevin Forde but anything that could go wrong at the change of ends did for them as they finished with only 13 men after both Rob Walsh and Alan Tyrrell were given their marching orders.

Two Mile House started the better and were in front within two minutes after Adam Byrne scored from play.

Rathangan replied with a free from Muiris Curtin but the House soon raced clear with a goal from Adam Conneely after Tony O’Connor set him up.

A pair of Didier Cordonnier efforts then improved the Two Mile House lead but a Rathangan goal from Kevin Forde kept them in touch.

Just four minutes after finding the net Rathangan soon went into the lead when they got a brilliant second goal with a poorly directed kickout from Luke Coy going to Ben Savage and the Rathangan half back lobbed the ball over Coy’s head and into an empty net.

Rathangan couldn’t build on the lead though and Two Mile House points from Byrne and Liam Coleman increased the lead.

Rathangan replied with scores from Rob Walsh and Shane O’Loughlin to leave the sides level but Rathangan’s effort was really punctured when Adam Byrne found the net on the back of an inside pass from Cordonnier.

Cordonnier then kicked his third point of the half a couple of minutes later as Two Mile House took a 2-7 to 2-3 lead into the break.

It looked set for a cracking second half but Rathangan never showed up and they remained scoreless over the thirty minutes.

Three points in the opening six minutes of the half from Coleman, Jack Collins and Andrew May essentially settled the game in Two Mile House's favour as they went seven clear and it was officially done and dusted in the 42nd minute when Byrne was brought down for a penalty and he himself slotted the kick into the bottom corner.

It was at this stage that Rathangan lost their discipline with Rob Walsh firstly seeing red on two bookable offences while Alan Tyrrell also went just mere minutes after appearing as a sub.

Two Mile House then rounded off the game with points from Coleman and James McGuinness as they coasted their way to the title.