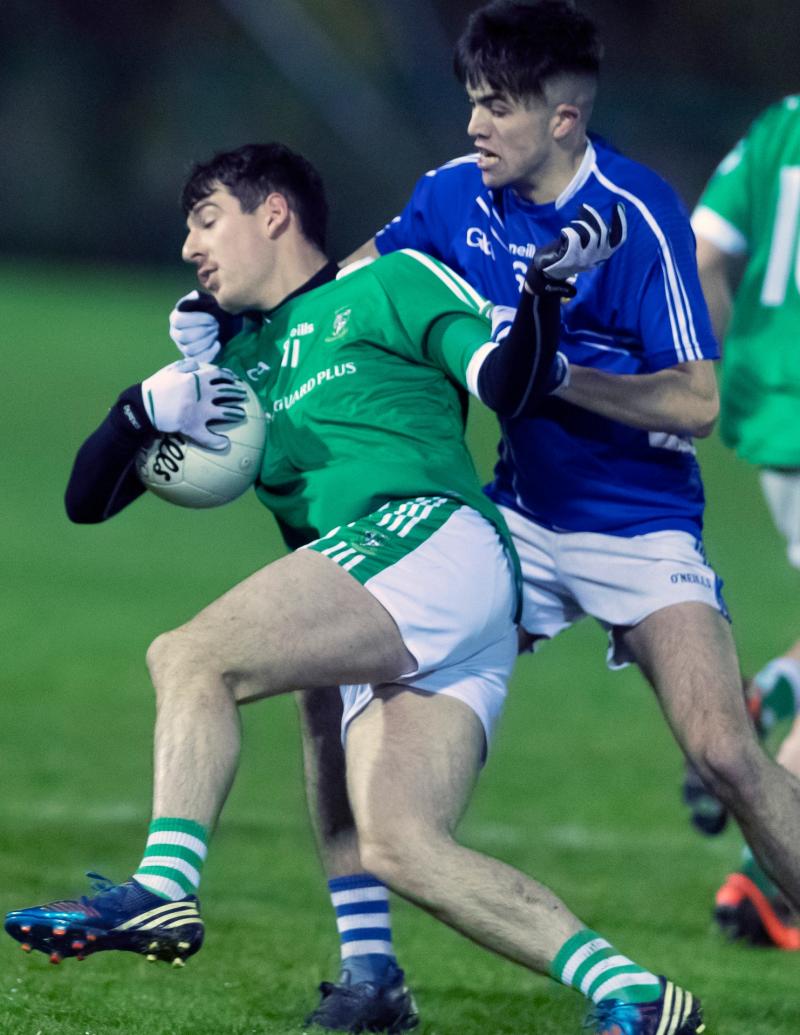 Moorefield's Evan O'Brien is challenged by Celbridge's Cian Powell during the U21 A Football Semi Final Replay. Photo: Sean Brilly

Celbridge will face off with Naas in the Under 21 Football Final after they got the better of Moorefield at the second time of asking in a bitterly cold Manguard Plus Hawkfield on Sunday evening.

Evan O’Brien’s stoppage time heroics merited the last four contest going to a replay but it was the Celbridge goal threat that proved too hot to handle for Moorefield.

Celbridge found the net on four occasions but it was Paddy Wall’s 20th minute effort that really got them going as Moorefield opened up an early 0-4 to 0-0 lead.

Celbridge got four goals in total with Darragh Archbold, Liam O’Flynn and Tony Archbold all netting in the second and it was the latter’s contribution that stood out as he put in a storming display from half back.

Moorefield raced out of the blocks and were four points up within ten minutes after a pair of frees from Evan O’Brien were followed by scores from the midfield pair of Aaron Masterson and Evan Kavanagh.

Masterson could have had a goal during that period aswell but he had a shot deflected wide before Celbridge found their feet with points from Dean O’Donoghue and Darragh Murphy.

Celbridge themselves had a chance at goal when Ryan Quirke saved from Conor Doyle but moments later the net was bulging when a poor kickout from Quirke went straight to Paddy Wall and he finished to the net.

O’Brien then kicked his third point of the half with a free from range as the teams went into the break deadlocked.

Moorefield kicked three of the first four points at the start of the second half with efforts from Masterson and O’Brien giving the Newbridge side a two point lead after Niall O’Regan replied for Celbridge.

Come the 40th minute Celbridge were back in front though when quick thinking from Tony Archbold set up namesake Darragh with a quick free and the wing back fired a shot into the top corner.

Murphy then added on a free before Moorefield scores from Masterson and O’Brien left the sides level at 2-4 to 0-10 going into the final ten minutes.

Celbridge took control in that final period as they scored 2-3 on the trot with Moorefield failing to score.

Liam O’Flynn, Paddy Wall and Darragh Archbold got the points before O’Flynn’s deflected goal in the 52nd minute essentially settled the game.

There was still time for Tony Archbold to score an outrageous individual effort in the final few minutes where he took on five players before scoring past Quirke for one of the goals of the year.

Moorefield threw Aaron Masterson in at full forward for the final few minutes but nothing broke for him as Celbridge sealed their place in this weekend’s final.