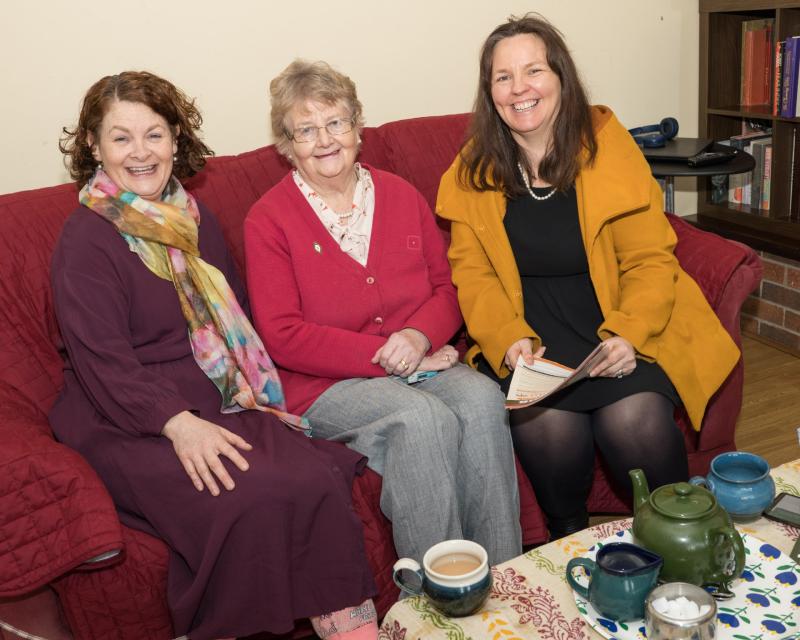 Contesting South Kildare is Anita Mhic Gib, principal of Gaelscoil Nás an Ríogh. A member of Aontú, Ireland’s most recently founded political party, Ms Mhic Gib describes the party as “arguably the most diverse political party in the country with former members of FF, FG, Labour, the Greens and People Before Profit compiling the backbone of Aontú”.

A mother of five, she knows first hand and through those of her pupils, the appalling lack of support services in education.

“I am utterly frustrated at the delays in assessments for young children; then trying to access an appointment for an occupational or speech therapist, the delays are horrendous. It can take years for the assessment never mind securing therapists and special needs assistants (SNAs) and all these delays during what are the vital early learning development years for the child”.

In Baroda Court, Newbridge last week, we met with Dr Deirdre Gleeson on the doorstep, and her experience in trying to secure an assessment for her son mirrored the candidate’s findings.

“My son had dyslexia and only we had the resources ourselves to get psychological reports, we’d never have secured an assessment, it took two years even at that to complete the process.” She stated the two tier pay of teachers, the poor pay/conditions of school secretaries and workers in early child care are all indicative of a lack of investment and interest in the education sector.

Wasteful management of funding was another issue she addressed: “€60m was returned to the Minister for Children, why​? Because monies that was allocated to social workers to handle children in care cases was returned to the Exchequer because  there weren’t enough social workers to cope. That’s shameful, why wasn’t the funding distributed to other childcare services or to the voluntary sector?

“The Indicons Report states that every euro invested in youth saves the state a further €2.20 in other expenditures such as crime prevention, mental health, etc” she added.

When Ms Mhic Gib, along with her husband Muiris and five children, moved from Newbridge to Kilcullen, she was horrified to find the family was placed on a waiting list to access GP services locally. “We were effectively waiting on someone to die, or move from the area, to secure the services of a GP.”

Ms Mhic Gib empathises with workers in the health service, to which Dr Gleeson, an Occupational Health Specialist, stated: “It’s intolerable; my colleagues are leaving their GP practices because they are overworked, under resourced, underpaid — and grossly under valued!”

The candidate noted that giving medical cards to U13s sounds like a good idea but when there are far more genuine cases needing the service, this she felt was an election gimmick.

“The elderly waiting on surgeries such as joint replacements, children awaiting scoliosis procedures – it’s shocking. Resources should be going to where the needs are greatest! Our two tier health system needs to go”.

Crime and the increase in people using recreational drugs was another point of discussion.

“We only have 11 gardaí in Kildare Drug Squad,” said Ms Mhic Gib — and three only in Co Laois. “Skeletal garda services from Portarlington, across Co Kildare right up to Kill – you ring a station and get passed on to a central phone system, that’s not good enough. Smaller communities are badly impacted; youth drop out of school and it’s not even picked up on the radar.

“I’m 20 years a political activist” she said “I’d be well able to speak up for the people of South Kildare in the Dáil; remember, the favourites don’t always win! A lot of elected representatives are sympathetic on the doorstep, as if they weren’t in the last government and had nothing to do with policies made!”

She concluded: “I’m not going to make empty promises to secure votes, the way other politicians ‘flip flop’ on important issues".

The principal with principles, representing Aontú, the party with a conscience.

She certainly has great passion and commitment and offers a completely fresh, new approach to politics, Anita Mhic Gib.