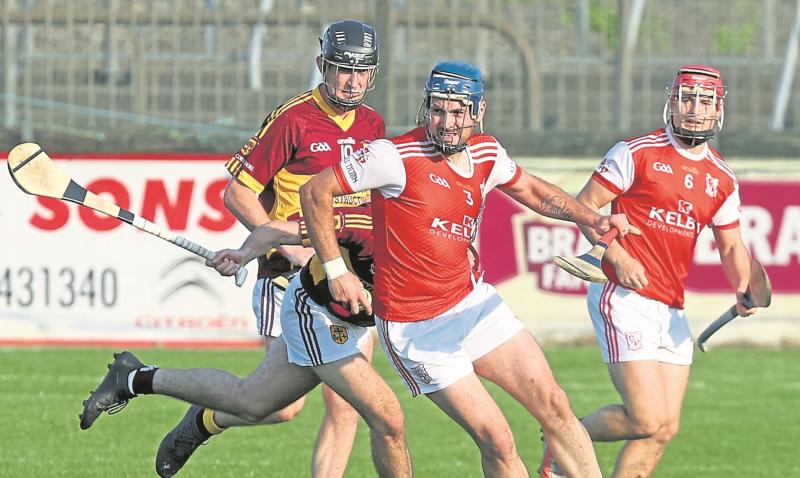 Coill Dubh Mark Grace drives out of defence to set up an attack in round 1, Group B of the UPMC SHC. Picture: Sean Brilly

Saturday (September 12) is All-Ireland final day and while the day itself, thankfully, is a free one of club fixtures, the following day, Sunday 13, will see the last of the senior football and intermediate football championship Round 2 games down for decision, while Round 2 of the Senior Hurling Championship will also be played.

In the senior football the two remaining games in Round 2 will see Moorefield take on Clogherinkoe while county champions, Athy, will face up to Johnstownbridge.

Moorefield are going through a 'mini' transition at the minute and will be hoping to have at least one of their injured players back.

Clogherinkoe, playing in the senior championship for the first time in their history have equipped themselves reasonably well. They do, however, rely heavily on Jack Robinson for scores and while the county man is playing to the top of his game, he will need a bit more help from a few of his team mates if they are to get anything out of this game. Having said that the same Jack is more than capable of taking any game by the scruff of the neck and putting his stamp on it.

Moorefield have not played to the top of their game this season, injuries, a few departures and indifferent form has seen them end up in Group D, still they will be expecting to progress and make it two wins on the trot.

The second SFC game at the weekend will see Athy and Johnstownbridge go into action and this will be a big one for both as well.

Champs, Athy, have been going through a bit of a sticky patch of late, and while Niall Kelly and Co. up front are mostly firing on all cylinders, the fact they are conceding at the back has to be a worry. Eight goals in two games certainly has sent the alarm bells ringing.

Johnstownbridge have lacked some consistency over the years, on their day they can be more than a handful for most teams but one just does not know which Bridge teams will turn up on the day.

Against Moorefield in the Prelim game they played extremely well with Daniel Flynn putting on an exhibition while Sam Doran and Sean Hurley can unlock any defence on their day.

Luke Flynn missed out on their game against Maynooth and his availability would be a big boost.

At the end of the day though Athy, provided they have shored up that leaky defence, should have enough provided they, Athy, can keep the mercurial Daniel Flynn in check (easier said than done).

Three games listed in Round 2 of the IFC completing that round.

Rathangan and Sallins go head-to-head in Group B in the only game listed for Friday.

Sallins played impressively to defeat Monasterevan in Round 1 while Rathangan lost out to Kilcock by all of 14 points.

Kilcock and Monasterevan is the third IFC game on the list this weekend end and if the first round is anything to go on Kilcock will be warmly fancied to defeat Monasterevan who were very disappointing on their first day out.

Milltown take on Nurney in Group C; both lost their opening games heavily and in fairness both are struggling at the minute. This is an opportunity to get points on the board but who wins this one is practically a toss of a coin.

Round 2 of the UPMC SHC sees all eight teams down for action in Group A and B.

Champions Naas take on Ardclough (Group A) and should have enough having defeated Confey comfortably last time out. Ardclough, on the other hand were very disappointing in their Round 1 game, going under heavily to Celbridge.

Hard to see anything but another win for Naas.

Confey, after losing to Naas, now face up to Celbridge on the same day.

Confey defeated Leixlip in the prelim before going under to Naas while Celbridge defeated Coill Dubh in the Prelim and then won their local derby clash with Ardclough.

Fair to say Celbridge look to be one to keep an eye on, and with Gerry Keegan, Niall O'Regan, Sam White and Fergal Conway, amongst others, all playing to the top of their game, difficult day looks on the cards for Confey.

Form points to Leixlip to take this one.

The fourth game down for decision in the SHC is in Group B when Clane and Coill Dubh will be clashing the ash.

Have to say Coill Dubh have turned their season around from early on, they played very well on their last outing, particularly up front.

Clane looked dead and buried but made a brilliant comeback against Leixlip only to fall in the final minutes of that exciting game.

Coill Dubh, however, are expected to make it two wins on the trot and maintain their unbeaten run in the group stages.