Kildare GAA: Hard to look beyond usual suspects ... but

Championship gets under way this weekend 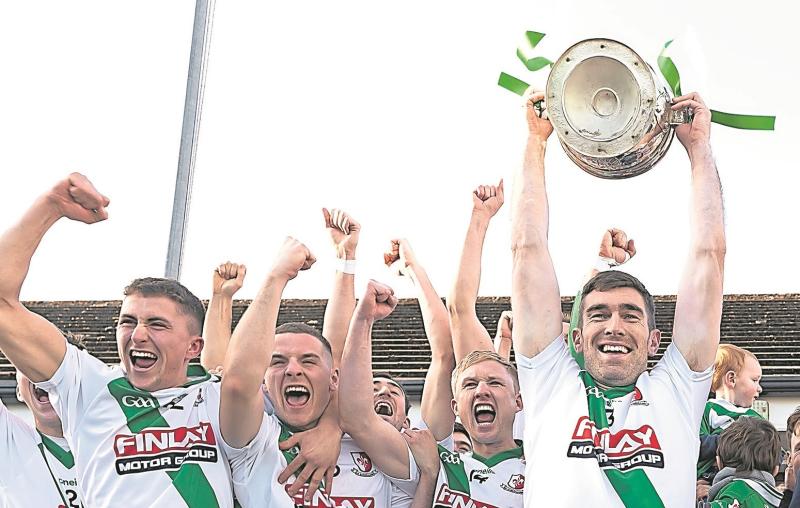 Sarsfields' Sean Campbell lifts after the Co. Final of 2019

It is only a few short weeks ago when the chances of seeing any football at all this season looked remote indeed but now here we find ourselves, with two rounds of the senior leagues under our collective belts and it is now on to the senior, intermediate and junior football championships.
Not unexpectedly the format of the various competitions have been altered, not overly though, but in an effort to get everything done and dusted before the big lad with the white beard arrives, there is a mere eight week stretch that will, hopefully, see the various championships completed.
A big ask?
Absolutely, but there is little choice to be fair to the people responsible for running the games in the county.
An open draw at senior and intermediate level, with no seedings, was, without question a huge risk but, despite looking somewhat concerned on the evening of the draw, Chairman of the CCC, Mick Mullen, was one relieved man when the top teams in contention avoided one another like the plague, in what was, I have to say, an open and transparent draw, for those sceptics out there who might suggest otherwise.
With current champions, Sarsfields and their main challengers, Moorefield, drawn in Group C and B respectively, if one or the other win their group and the other is runner-up they will meet in the quarter final, other then that they cannot meet until the final.
Sarsfields go into this year's as champions buoyant having halted Moorefield's three-in-a-row ambitions last season, after a replay.
This term they have a new manager, former Laois player Billy O'Loughlin, while The Moores also have a new boss, one of their own whose record when it comes to senior football championships in the county is second to none, Roli Sweeney.
How either, or both, progress will be watched with much anticipation, on the face of it both should advance from the groups, Moorefield in Group B along with Raheens, Carbury and Maynooth. Incidentally it is some statistic that three of the managers in Group B are all former Moorefield stars.
No disrespect to Raheens of Maynooth but The Moores and Carbury are expected to advance.
In Group C, along with the champions, are Johnstownbridge, St Laurence's and Eadestown. Very difficult to seen anything but Sarsfields and Johnstownbridge, now managed by the man with Midas touch, Luke Dempsey, advance, even allowing for the fact that Daniel Flynn is expected to be missing for at least a month due to a hamstring problem.
Group A has Clane, Castledermot, Athy and Monasterevan, the reds of Athy are short priced to make it to the last eight but who will join them will be very interesting and while most would expect the boys in the all-white of Clane to advance, neither Castledermot or Monasterevan can be taken for granted.
Group D will see Celbridge, Naas, Round Towers and Confey cross swords.
Celbridge, on paper, are a side that so much is expected of each year of late but they have consistently failed to deliver.
Could this be their year?
They certainly have the individual talent but can they gel that into a side that can become genuine champion-
ship contenders.
Naas, last season's winners of the SFL Division 1 title and the Leinster Leader Cup but then simply lost their way failing to even get out of their group but no doubt manager Niall Cronan, who will have Niall Carew at his side this term, will be very, very anxious to make-up for what happened in 2019.
Round Towers and Confey make up the quartet, the boys from the north of the county might find this championship a step too far, they are struggling to even field having given Moorefield a walk-over in Round 2 of the SFL last week and while Towers, at their best are capable of causing a shock, it is difficult to see anything other than Naas and Celbridge making it through to the quarter finals.
Most of those predictions are made, not on current form, as we have seen just two rounds of the senior league to date, but on last season's form, a dodgy way in many respects and when you consider that teams have only been back training for in or around four or five weeks, there has to be scope for upsets and indeed possibly a few shocks.
The fact that the competition is being run off in groups, will, of course play into the hands of the bigger clubs, with bigger panels as injuries are bound to play a much bigger part in this season's championships, more so than we have been accustomed up to now.
Already we have seen a few top players missing league action due to early knocks and no doubt we will see more in the coming weeks, so if there are going to be a few upsets bordering on shocks where are they most likely to come?
Going back through the groups and taking them in order, Group A looks reasonably predictable and it is difficult to really see anything other than Athy and Clane.
Group B, is possibly not quiet as predictable and while most would agree that The Moors and Carbury should advance (not forgetting Carbury handing Moorefield a bit of a hiding in Round 3 last year, winning 3-12 to 1-7) and Maynooth making it to the quarter finals, Raheens can never be dismissed out of hand.
If there is a shock here it could possibly come from the Frank Hanniffy managed Caragh side.
If so, at whose expense?
Eoghan O'Flaherty has not played any league this season up to now and if he does not make it back on time, Philie Wolfe's charges just might struggle.

Interesting or what.
In Group C, Sarsfields are a shoo-in; I saw JTB in action last weekend and while not overly impressed they will surely get through ahead of The Larries and Eadestown.
Celbridge, I feel won't be too far away this term. Yes we have all said that recently but looking at them last weekend they are moving well and their big names are in top form.
A definite question mark over Naas; won one league game and lost one this term, did not really perform in either and they will need to get an early win to get their confidence going.
Towers will always put their best foot forward, could they be a surprise from Glenn Ryan's boys here.
Confey are in big trouble so this groups is essentially a three team group; the big question mark is around Naas and could they be vulnerable?
Come Monday evening we will all know a little more of how things are shaping up and while I stand by the original predictions, don't rule out at least one surprise and possibly even one big shock.