Kildare GAA and the Shebeen Championship 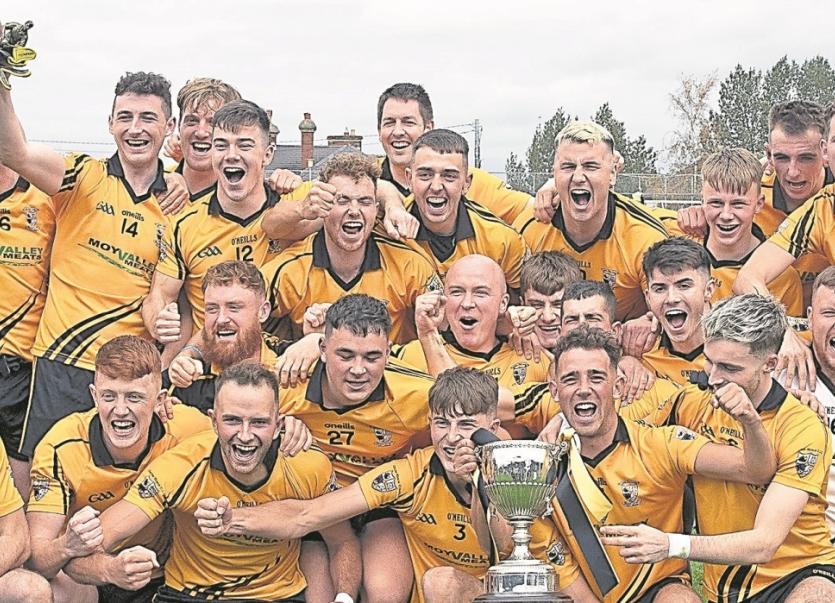 Clogherinkoe, winners of the IFC 2020

Joe Mallon Motors have long been associated with Kildare GAA and the title sponsors of the SFC. Joe, Anthony and the Mallon family are huge GAA fans and apart from their SFC sponsorship they are also heavily involved with providing vehicles for GAA folk in various capacities in Kildare and no doubt their sponsorship is much appreciated.
Prior to last Friday evening's draw we (press) were informed that a new sponsor had come on board for the Kildare intermediate football championship for 2021 and while it is always great to see new businesses getting involved, lo and behold when it was announced, sure I nearly choked, not sure if it was with excitement or shock.
Over the last number of months, well in fact well over a year at this stage during lockdown time, we heard time and time again about, shall we say, unauthorised drinking establishments, aka shebeens, operating throughout the county. Needless to say I am only going on secondhand information here, having failed to get an invite to sup in any of those premises (not, of course, that I would have taken up any such invite).
So can you imagine the absolute shock when it was announced that the new sponsors for the IFC was The Shebeen Lounge. Yep, The Shebeen Lounge.
I wondered to myself would that be one of the shebeens that made the news over the past number of months?
Again, not talking from experience, but it is my understanding, there was one around Kildare town; one further south where big celebrations were held at the back end of last season; one between Newbridge and Naas; and a few north of the county in the Celbridge area.
And no doubt, many more besides.
Maybe, I said to myself, one or other of those 'establishments' had been up before the good Judge in Naas and for their sins had been informed they must make a donation to a charitable cause, to avoid a, ah, em, stain on someone's character, if you get me drift.
The well-known Judge who sits in the county town has been known to ask for donations for many organisations, so maybe he decided the Kildare Intermediate Football Championship needed a bit of a boost and so decided to pass on a few euros in that direction.
However, having been informed initially that the naming of the IFC was The Auld Shebeen Lounge IFC, we were later informed that the correct new title for the said championship is to be: The Auld Shebeen Bar Athy Intermediate Football Championship.
A well-know and very popular premises The Auld Shebeen Athy, is a 150-seater bar, lounge, outdoor terrace, rooftop bar, private dining area.
It has the lot, I am reliably informed.
And now the Kildare Intermediate Football Championship to boot.
Can't wait for the 2021 final of that particular championship, no doubt the celebrations will be well attended and well supported.
And if it's transport you need to get there, sure give Tom Cross Transport a shout, the said Tom Cross is again the main sponsor of the Kildare JFC 2021.