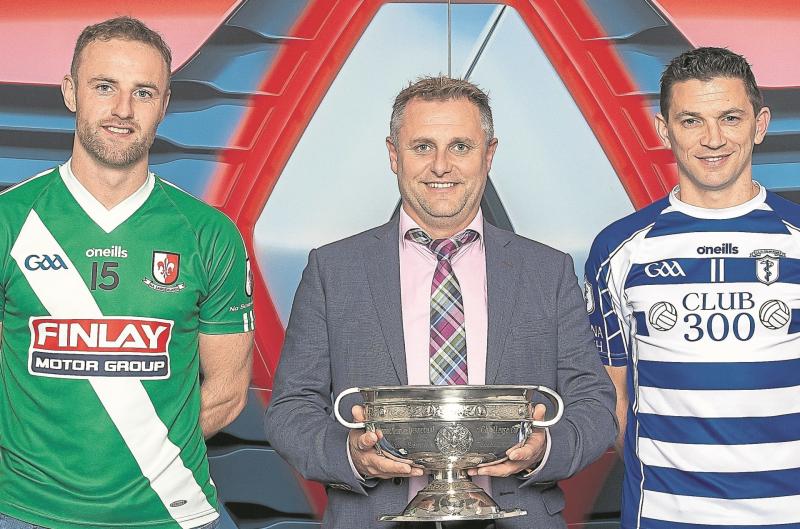 Surrounded by spanking new array of the state-of-the-art Renault fleet at Joe Mallon (Renault) Motors Headquarters on the Sallins Road, Naas — title sponsors of the Kildare senior football championship — we met with captains and management of both Sarsfields and Naas last week for a photo shoot and a chat.
Not for the first time in such circumstances the question was asked “do we take away one of the cars with us when we are leaving.”
But Anthony Mallon was not budging on that one.
Naas were represented by interim manager Eoin Doyle and team captain Eamonn Callaghan and both immediately recognised that getting to a senior final, for the first time in 30 years, or more regularly as in the case of Sarsfields, always brings a bit of a buzz around the respective areas.
“While, we as players” said Eoin “will concentrate on our preparation for the final, our fans and supporters, who we rely on so much during match days, we be concentrating on the build-up to the big game and all that that entails.”
Captain Eamonn Callaghan said getting messages and meeting lads that were on the last team to win in 1990 and reach the final again in 1991 is great, it gives everyone a lift, a buzz, so overall it is brilliant.”
Asked why it has taken so long for Naas to get back to the final brought the quick response “it's not for the want of trying I can assure you, we go out every year and for various reasons it did not happen but we are concentrating on the future now; it's a lot different say in Newbridge with the two clubs and year in and out either Sarsfields or Moorefield are there are thereabouts, something we have admired over the years, but that is the place we want to get to” said the team captain, “all we can think of is the present, the moment and where we are and hoping we can continue to be in finals over the next ten years and beyond.
“Getting to the final is the first step, now we have to go and win one and then continuing being competitive at senior level and there is no reason why we should not be.”
Eoin pointed that over the past number of years Naas has seen a lot of young players coming through the ranks, those lads are now beginning to mature and know what it takes to get to finals, we are in a good place with so many young, talented players so the future is definitely bright for Naas.”
Looking back on the semi final between Sarsfields and Celbridge, Eamonn said the conditions were very similar to their own semi final, not ideal for football, windy and wet “both teams played very well and it came right down to the wire, a tough, competitive game that will certainly stand to the winners.”
Could you see Naas getting to the county final at the start of the season?
Eoin Doyle response was quick and to the point.

“Yes, you have to believe, you have to have faith with the team, whether that be with Naas or Kildare regardless of what the odds are, it is all about belief, your goal and while we have one more step to go to actually reach that goal, we know that it won't be easy against Sarsfields; we know we are the outsiders but we have the belief we are under no illusions what we face, Sarsfields have been their or thereabouts most seasons, the amount of medals they have, the Kildare players they have but while we are underdogs, we have the belief, we will prepare well, will do the very best we can and we'll see where that takes us.”
Last word to captain Eamonn when asked if Naas can win replied “we can, it will take a lot of work, we will need to get the breaks, need things to go our way on the day but, yes, I certainly believe we can win it.”
Meanwhile Sarsfields captain, Alan Smith, and Michael Browne (selector and standing in for Padraig Brennan) is heading into his 16th year playing senior championship football which began back 2005, three years before he broke into the Kildare team, is a vastly experienced player admitted that going into the semi final against Celbridge one of the things they focused on was last season's defeat by Athy and did we learn lessons from that defeat.
“We kicked 17 or 18 wides that day, went in three points down, struggling against a blanket defence and so it was on our minds to go in at half time against Celbridge ahead of them; our shot ratio in the semi final was up to 70 per cent so we did learn from the Athy experience of last year.”
The Sarsfields captain has played a lot of football, both club and county, so we asked what does the present manager bring to the table that might be somewhat different?
“Extremely organised, lots of attention to detail, focus a lot on the way we want to play; we focus a lot on kick-passing, trying to play through the lines; a lot of skill based sessions, nothing too elaborate but we work on a lot of game plans.”
Kieran Lambe is looking after the fitness side of things this year and as Alan said he is excellent, adding “we did a lot of work in the off-season, on our own before we came back and that showed against Celbridge when we outscor-
ed them 1-4 to 0-1 in the final minutes but we are finishing games well, we have a very competitive panel, some-
thing that Michael Browne was at pains to point out.
“We have an extended panel of 37” said Michael, “30 on match days; but we have five lads to come in who are as strong as those on the field and we have no issue with making early changes regardless of who it is, we are all in it for the one reason and everyone buys into that.”
Two points down against Celbridge, less than ten left, did you feel you were in trouble.
“No, there was always a kick there” admits Alan, we have been down in many big games but came good, it is something we have done over the years; the resilience and belief is there.”
Winning championship is a big help, young players see that and that is their goal from an early age, our Academy is top class and that is where the seeds are sown, they see the team winning and they want to be there in time winning championships.
As for the best player Smithie has played against?
“Club-wise Ollie Lyons; county-wise Johnny Cooper.”
No doubt being captain brings extra responsibility?
“You have to lead by example, even if it means getting out early at training, doing that extra bit; even when I'm not captain I like to think I do that extra bit, do that extra gym work, really everything just ups that little bit more; it's all so profes-
sional now, it was just at county level but now it is at club level and while there is no drinking ban or anything like that, there is no messing going on that used to be going on, it is all such a competitive environment at club level these days.”
Can Sarsfields win?
No hesitation.
“Absolutely.”