The boys from the county town finally deliver the goods 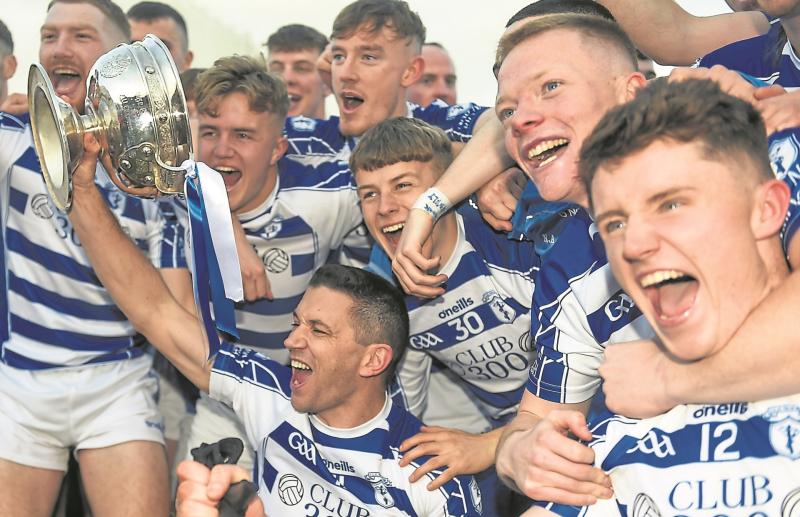 Just before the throw-in for the final of the Joe Mallon Motors SFC on Sunday, an announcement on the PA informed us the start would be delayed for ten minutes due to the large crowd still attempting to gain entry. One wit was overhead to say “that's the Naas crowd, it's so long since many of them were here on county football final day they got lost on the way.”
A bit of a giggle from his pals but while the boys from the county town have been here for many a final, from underage to the Leader Cup final in recent times, it has been all of 30 years since they were on centre stage on club football's biggest day of the year.
And while they did win the year previous, a gap of exactly 30 years just seems incredible for a town and a club the size of Naas.
But as player/ manager Eoin Doyle and his captain Eamonn Callaghan reminded us in a pre-final chat over a week ago, “it has not been for the want of trying.”
Sunday though, was a kin to days of old, a packed attendance, a mighty day for a game, brilliant colour and atmosphere; a minor final between Balyna (winners) and Maynooth had thrown up a ding-dong battle as we awaited the last of the fans to take up position and away we went.
Spotted among the big attendance were many of the Naas players that played all those years ago. John O'Rourke, Gull McAuley and birthday boy, Gerry Buggy were spotted, as was centre back from 1990 Bon O'Connor.
Sarsfields were there in big numbers of course; confident without question, that another title and another 12 month stay for the Dermot Bourke Cup at the bottom of the town of Newbridge, was about to unfold.
The Sash had been hit a big blow earlier in the week when experienced and regular keeper, Patrick O'Sullivan, picked up an injury and so drafted in was standby minder John Melia, who in fairness had a mighty game with two particular brilliant saves that kept his goal in tact.
Referee Billy O'Connell got things started some ten minutes or so after 2 and it did not take long before Naas were into their free-flowing attacking mode.
One, two, three, four, five points on the board; not a sign of a score for The Sash while John Melia ensured it was no greater than five when denying Alex Beirne just before the first thirst quencher with an acrobatic dive to his right.
Sarsfields fans were still in fine voice but were showing a little uneasiness as Padraig Brennan was handing out what orders he could during the one minute break.
Off we went again as Jerome Higgins could be heard roaring on the boys in blue as the huge Naas attendance gave voice to their favourites.
The man knows as simply 'Ben' finally got the boys in green up and running but Naas remained the dominant force and while Sarsfields did narrow the gap there was still a healthy three points to the good at the long break.
John O'Rourke was heard asking Gerry Buggy where did he intend celebrating his birthday but Gerry being Gerry did not take the bait and ignored the question.
Back we came, another huge roar saw us up and running again.
The big man in the middle of the field, Tadhg Hoey raised the first white flag of the second half Paddy McDermott replied, Sean Cullen added another, Darragh Kirwan had five in it as Naas were beginning to believe it might, just might be possible for the dream to be fulfilled after a nightmare 30 years.
The man with mullet hair style, Karl Hartley, got one back for The Sash but two more from Alex Beirne and flying half back, Tom Browne, extended the gap to six.
Reality was beginning to bite, for Naas that it could be their day and for Sarsfields that what was supposed to be a bit of a doddle for the 2/5 favourites was beginning to look like anything but.
Yet this was Sarsfields, they are hardened county final day specialists, have dug themselves out of more holes than Ole Gunnar Solskjaer has since becoming Man United manager but like the Norwegian, were beginning to look somewhat vulnerable.
Barry Coffey and the impressive Tadhg Hoey reduced the gap to four, then to three as it really was looking like squeaky bum time for the boys in blue and white.
Sarsfields smelt blood, poured forward but missed chances that made one wonder had someone moved the posts, finally Darragh Ryan had it back to two.
The Boys of 1990 were now shifting in their seats like they had suddenly located a splinter in their rear ends.
Gary White had the ball in the Naas net only for the referee to call it back and award a free.
One point in it as were informed there would be three minutes — at least — of time added on.
The tension was practically unbearable as Sarsfields had possession on their 45m line but somehow Eamonn Callaghan managed to get a hand in, the ball flies out, heads to the Kilcullen end and Paul McDermott fires it over.
Thirty years of torture, torment, agony and heartbreak is finally ended.
On come the fans in droves, as many as we saw back in the Newbridge Or Nowhere game against Mayo a few years ago.
Social distance was abandoned as hugs, back slapping and fist pumping were the order of the day.
And all on the fifth anniversary of the death of Paddy Hackett, the Naas secret weapon, had, no doubt, helped to deliver for his beloved team to finally get over the line.
Don't know where Gerry Buggy and his 1990 compatriots celebrated, but like Eoin and Eamonn and the entire team and Naas GAA community, it was no doubt extensive and ongoing.
Enjoy! Enjoy! Enjoy!